Breckenridge, Colorado… by way of dinosaur trails and rock deposits 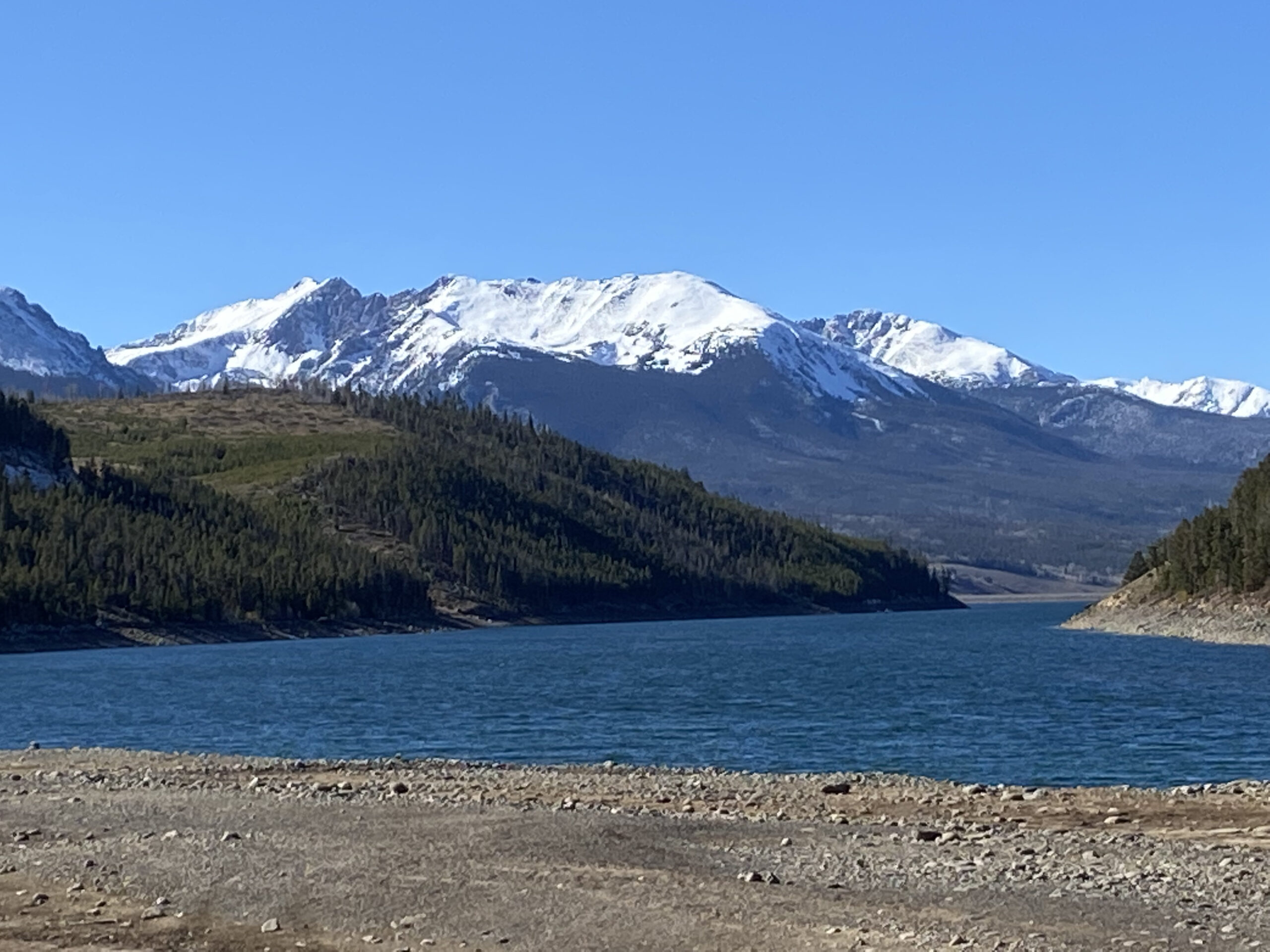 Breckenridge, Colorado… by way of dinosaur trails and rock deposits

We set out for a weekend in Breckenridge one Friday morning.  Normally, it’s a no-brainer, no map-planning destination.  Take I-70 west out of Denver, turn left at Frisco.  I didn’t want to go the more direct I-70 route.  Yes, I-70 is faster than the US 285 route we chose.  On this day it was a difference of about 40 minutes — worth the alternate route for the history and geology and beauty of driving through South Park (yes, the same South Park made famous by the animated television series.)

There’s advantages to ANY drive in the mountains  — short, extended, direct, circuitous.  I-70 is scenic, just as soon as the climb outside the city begins.  It showcases the great Eisenhower Tunnel the highest vehicle tunnel in the world at 11,155 feet altitude.  It’s a mini-adventure to drive through for the kids — or the kid in us.  Check to see if you can hold your breath until you exit the other side. Downsides:  generally more traffic, and, after driving it more than a few times, the US 285 route is a great change-up. 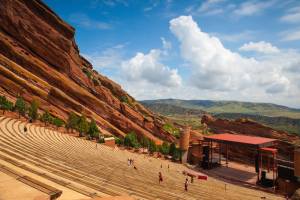 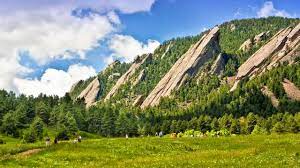 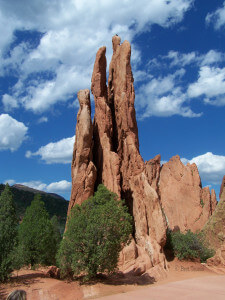 Flatirons of Garden of the Gods, Colorado Springs, CO

The relation of arguably the best concert venue in the world, Red Rocks Amphitheater, to the magnificent Flatirons of Boulder,  (so-named because they look like irons sticking up out of the earth,) and the enchanting Garden of the Gods in Manitou Springs is apparent.  All consist of the iron oxide sediment that initially formed in horizontal layers.  They were then forced into dramatic vertical layers due to the uplift pressures of the Rocky Mountains and Pikes Peak.  They all swirl together in history with dinosaurs and ancient sea beds, indigenous peoples and gold and silver miners.

Red Rocks Amphitheater is in the town of Morrison, founded in 1872 by George Morrison.  Like many a fortune hunter of that era, Morrison realized the easier profit was in supplying miners with goods and services, or “mining the miners” and not necessarily mining the gold/silver nuggets.

In 1877, Arthur Lakes, a geology professor at the Colorado School of Mines, made the first of what could be considered a Who’s Who of dinosaur bone discoveries.  These included:  Triceratops, Diplodocus, Alosaurus, T-Rex, Brontosaurus.  He contacted famous paleontologists, and bitter rivals, Othniel March and Edward Drinker Cope, triggering the “Bone Rush” that coincided with the Gold Rush in Colorado.   Well worth taking some time to soak in the paleontology and geology of this section of the world, visualizing the creatures and life that flowed through this area long ago.  Morrison is worthy of a day trip all its own.

There are fun little shops and numerous restaurants to try out.  Often, when we have tickets for a show at Red Rocks, our plan includes a stop at either Twin Forks Tavern or 5281 Seafood, Steakhouse.

Our drive this Friday morning continued on US 285 through Bailey and on to Fairplay and Alma.  I am awestruck each time we begin the descent from Kenosha Pass.  The mountains break away to welcome us in to the South Park valley,  It’s not hard to imagine an ancient sea in the middle of this valley.

Today we stopped at the Soup Pot in Fairplay.  It was brisk in the mountains, and soup was a warm blanket for the tummy.  Part of the fun of going to local restaurants wherever we happen to be is getting the chance to talk to people from there, as well as fellow travelers.  This day we visited with a couple women from the San Francisco area that were driving through the state.  So fun to get to share adventure stories with others.

While we often take shorter jaunts, even just for a few hours, driving through, around, and in the mountains.  Though at some point, staying at least one evening in the mountains is essential to get a full experience of their majesty.  The particular cabin we stayed at this weekend was in Breckenridge, backing up to Mt. Quandary, with a wall of windows to see her in all her glory at different times of the day.  Legend has it was named by a group of miners who found a metal they could not identify in the 1860s, which put them in a “quandary,” — guess that’s as good as being named after a person, and maybe a bit more interesting.

There is nothing quite like waking to the sun-spotlight on Mt. Quandary. She demands your attention.  As the day goes on, each succeeding movement of sun highlights a particular beauty in it.  Sometimes, when I didn’t realize I had stopped paying attention to Quandary, she would POOF! turn into a magic light show and I could not look away.

Activities are numerous.  Hiking, mountain biking; and always at the top of the list during winter seasons:  skiing, of course! Restaurants in Breckenridge are diverse and plentiful.  Everything tastes good in the mountains.  First morning we began the day at La Francaise.  Very good.  Be prepared to wait in a line that wound out the door.  We did, it didn’t take long, and it was worth the wait!  Husband Chris had ham, egg & cheese baked IN to the croissant. I had the Italienne crepe.  Both left us relishing every last bite.

Our full stomachs inspired us to walk Main Street Breckenridge.  Lots of delightful shops and great people watching.  Breck has a thriving arts community that we’ve treasured for the last couple decades.  Then back to the cabin to hang out.  Even resting in the mountains is better than resting in the city.

If you’re still hungering (pun intended!) for one last adventure, it’s worth planning the return to Denver around dinner time.  The Fort Restaurant  is a snapshot in time.  It’s modeled after Bent’s Fort, the 1833 historic trading post in La Junta, Colorado on the Santa Fe Trail. 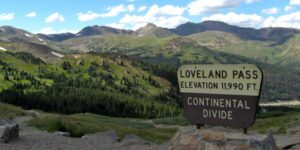 That final stop on top of Loveland Pass put an exclamation point to a fabulous weekend.  I’m filled with the appreciation of spending time going the slow route, seeing the history and beauty of all that surrounds us. I highly recommend it.