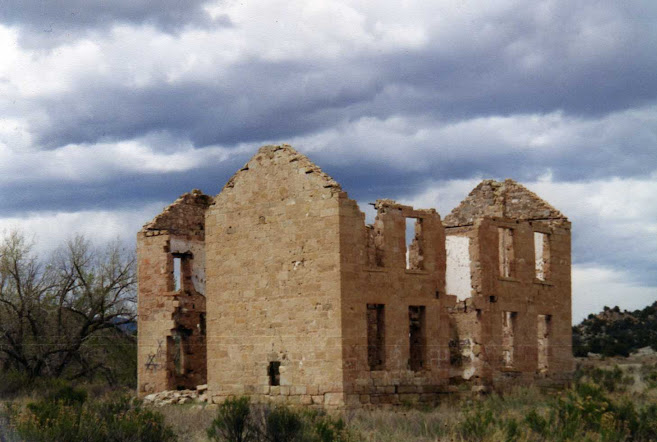 It’s a Saturday in late Fall, with a gleaming blue sky and 50 degrees to draw us in for a drive. These days I love revisiting some of the places I haven’t been to in decades. Canon City and Phantom Canyon Road are a couple of our favorites. It’s a  daytime excursion. We left about 9:00 am.

Heading south on I-25, Chris had a yearning for a breakfast burrito — his way of taking the pulse of an area, much like mine is ice cream! An hour into our trip we stopped at El Chapin. While the website reads this treasure as “restaurant”, it is in fact a food truck, with several tables in the parking lot of a meat market. Chris raved about his breakfast burrito, reckoning it’d be worth a return trip to taste some of their other food. These are the building blocks for future adventures!

As is the case in many Colorado destinations, the drive is beautiful and packed with history. Pointing the car toward Canon City, we picked up I-25 to Colorado 115 and turned west. This region of Colorado begins to look like the southwest of New Mexico and Arizona — arid, lots of scrub flora. It takes on the mountainous look as we approach Penrose, just outside of Canon City.

Named for Spencer Penrose, this town (1865-1939).began as a landing place for Penrose and cohorts when they were in the area. He was one of four brothers born to a prominent Philadephia, PA family. One brother was a senator and leader in the Republican party, another a medical doctor, another a geologist. Spencer (nicknamed “Speck”) graduating last in his class at Harvard, took his graduation money and headed west. After several failed business ventures he partnered with Charles Tutt on a gold mine in the Cripple Creek gold rush. He was on his way. Eventually, in 1916, he began construction on the award-winning Broadmoor Hotel in Colorado Springs.

On the opposite end of the spectrum, the Colorado State Penitentiary began as a territorial prison in 1871. The first escape happened in December of 1871 — the prisoner just walked away. Not surprisingly, there was a public outcry for increased security. The prison administration found the means to buy wood for the inmates to build their own wall. 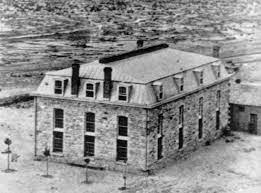 When I was young, every now and again my parents would take out-of-state visitors to the spectacular Royal Gorge Bridge in Canon City. This suspension bridge was completed in 1929 and is still one of the world’s highest. In the early 1960s the only activities associated with the bridge, that I was aware of, were walking and/or driving across the bridge. It was breathtaking, both literally and figuratively, to look between the wood slats of the bridge to see the almost 1,000  feet below to the Arkansas River. 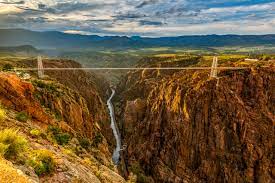 While there’s no longer public driving across the bridge, there is a whole mess of activities now in residence surrounding the Royal Gorge: zip lines, and gondolas, climbing and river rafting to name a few.

As we headed for home, we decided to visit one of the more hair-raising and beautiful stretches of road: Phantom Canyon Road. The road is truly a destination, and activity, all in itself. Activity because at different times we’ve found it to be one of those white-knuckler driving experiences. Yet history and  beauty is in every turn. It was built beginning in 1892, initially as a narrow-gauge railroad between the mining towns of Victor and Florence and Canon City to carry supplies and ore between the two. It’s name derives from an incident a railroad crew experienced. Seems the railroad crew was heading toward Cripple Creek when they saw a man in prison uniform with a number clearly seen on his back. The engineer contacted the warden at the Colorado State Penitentiary in Canon City once they reached Cripple Creek. The warden said that inmate had been executed a few days before. Hence the name, “Phantom Canyon Road.” 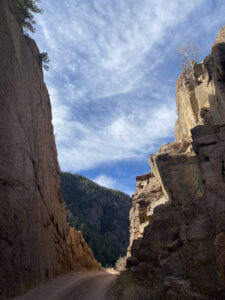 Our Phantom Canyon experience on this day was up to expectations.  It doesn’t take long for the paved road to turn to dirt, becoming ever more narrow as the altitude ascends. There’s a couple hand-hewn tunnels that bear the markings of chisels. It’s easy to hear the clink of all the blows it took to render a path through a mountain for commerce and travel. That scene is played over and over around all kinds of crazy twists and turns. 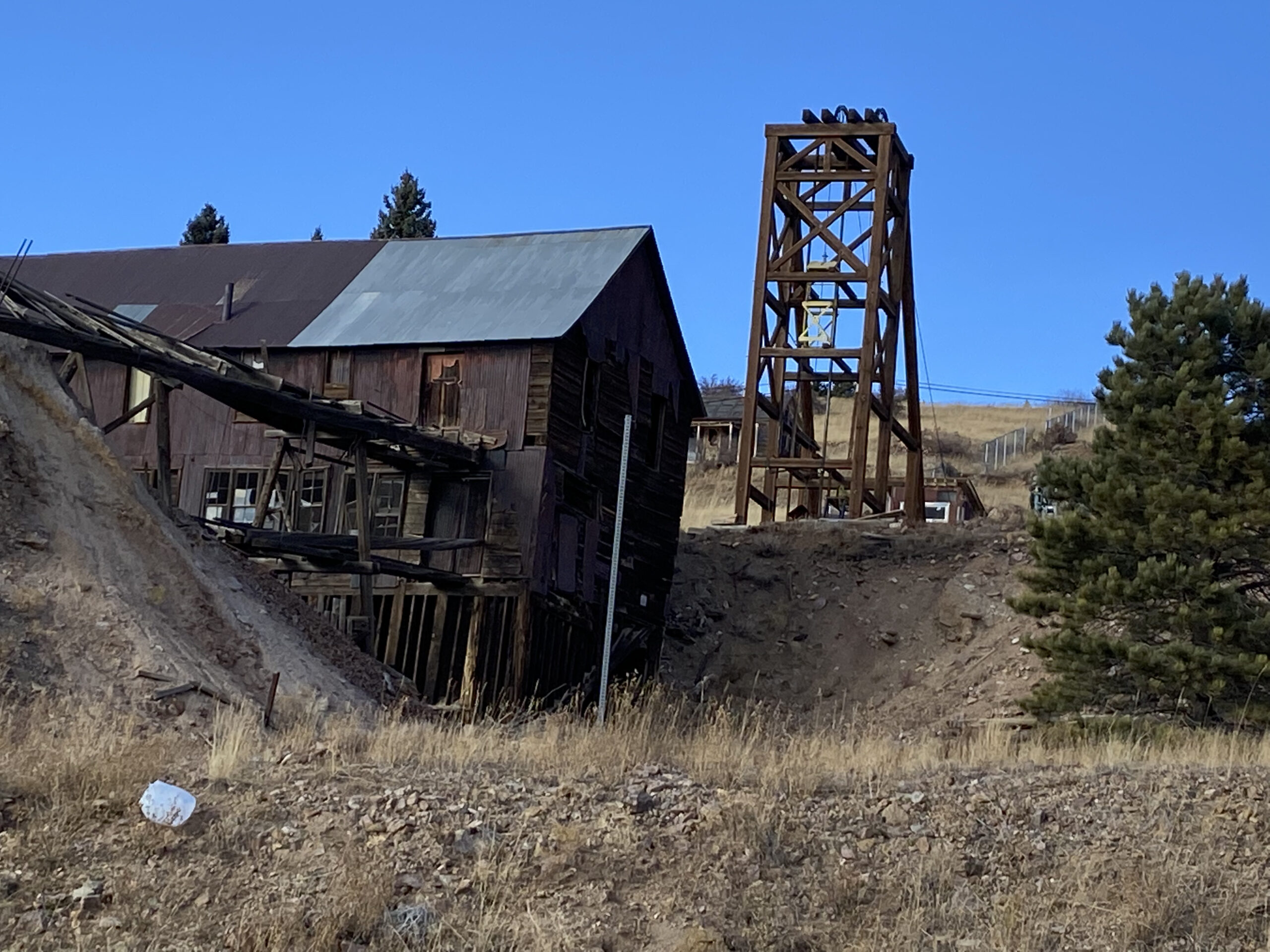 After about an hour of this Phantom Canyon adventure we landed in Victor, an old mining town with the evidence all around it.

It’s a magical little village that transports us to gold rush days.  We stopped at the Gold Camp Bakery for lunch. Their sandwiches are wonderful — large, had all kinds of veggies with the roast beef served on homemade onion & herb bread. Chris had chicken pot pie that he declared “delish”. Finished with peanut butter cookies. Yum! 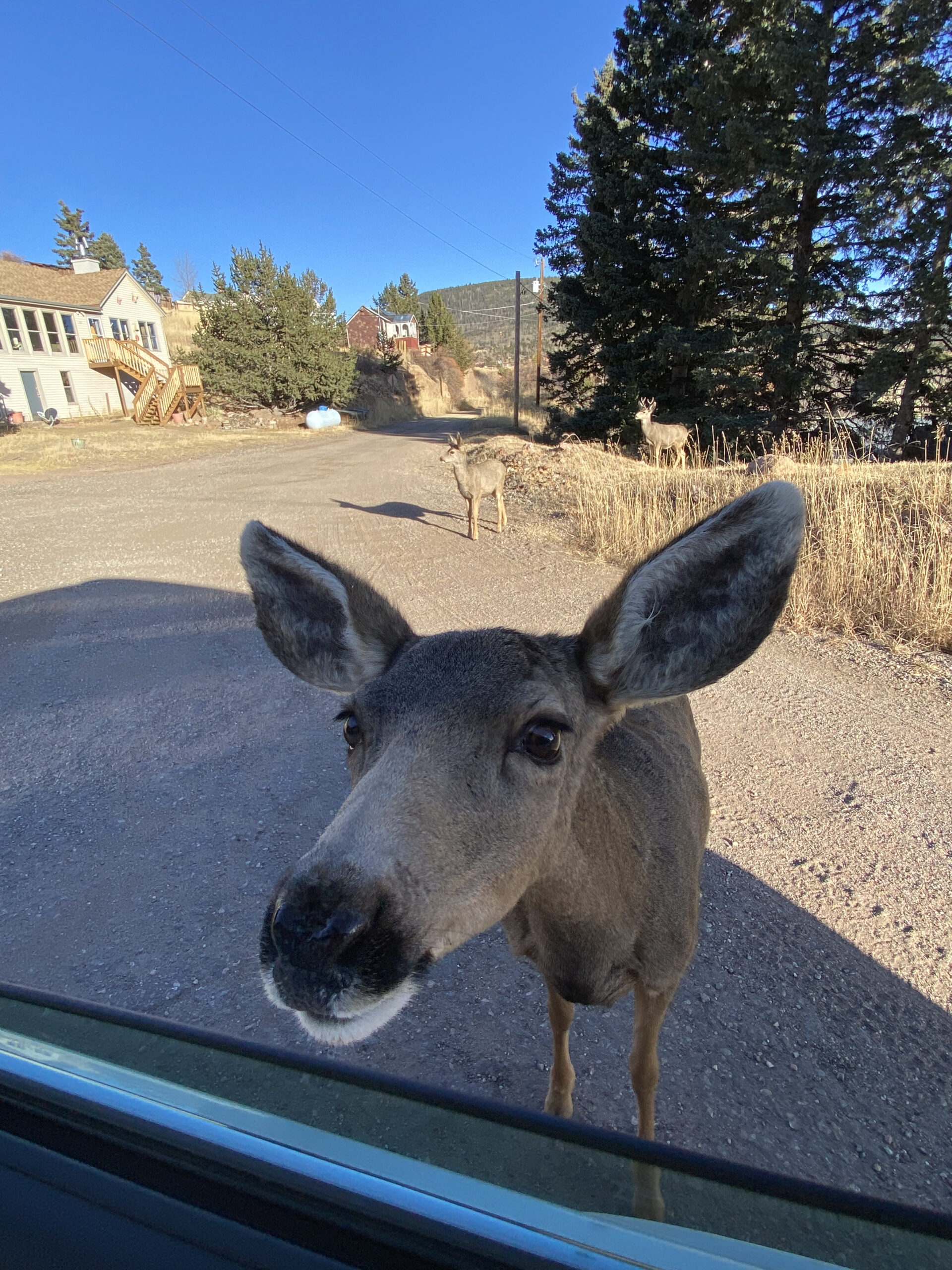 As we set off for home, we drove around Victor a bit. It wears its history on its sleeve. Charming. As we rounded one sharp dirt road turn, there was a family of deer all settled on the road. Looked like a mama with three young ones. As we waited patiently, mama deer came toward me. I had to wonder if she was sensing I was a mama too. Knowing it’s best not to interact at all with any wildlife, for their protection, I tried ignoring her. She kept her approach looking at me with those soulful gentle eyes.

She was happy to stay with us for several minutes, then mama deer strolled off the road with her stag and  kids, eating the grasses on the side. That visit with nature camped in my heart for the rest of the trip home. It speaks loudly of the beauty to be found in this simple drive through of an old mining community.

We were home at 4:00 pm, seven hours later and  full up with being together, experiencing the beauty around us. 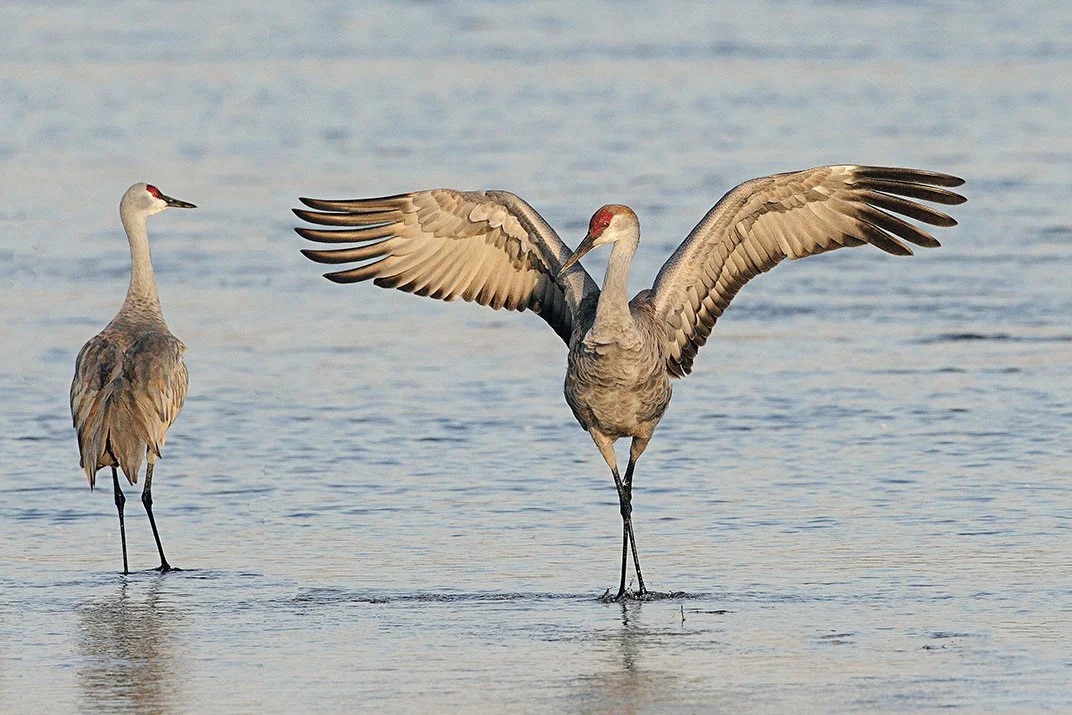